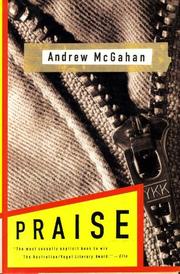 Nothing life-affirming here—this prize-winning Australian first novel, straightforward and effective, immerses us in the drugs, sex, and general ennui of slackers Down Under. Young Gordon, having just quit his latest undemanding liquor- store job, has no ambitions beyond getting on the dole when he receives a call from—and starts an affair with—recently laid-off co-worker Cynthia. Though attractive to women (because, he says, having ``no particular life or commitments of my own, I was never going to threaten the life or commitments of anyone else''), he's unenthusiastic about sex; Cynthia, emotionally crippled in her own way, lives for it, impersonal or otherwise. Each also physically handicapped—he by life-threatening asthma, she by a skin-disease so acute that even gentle contact causes bleeding—they spend the next few months together, consuming drugs, having sex, coping with pregnancy, abortion, and venereal warts. Meanwhile, Gordon displays remarkable integrity avoiding commitment (``I preferred sausages, or pasta, or Chinese. Things you didn't have to chew''), splitting with Cynthia when love blooms—an integrity paralleled in long, frank, graphic depictions of distinctly untitillating sex: scenes that, despite their excess, are the opposite of exploitative. With Cynthia gone, Gordon commences an unsatisfying liaison with an old flame; lands in the hospital; and, told by the doctors to quit smoking or die, chooses the latter. A bestseller in Australia, but without the superficial glamour of a Less Than Zero (to which its US publishers would like it compared). Unlikely to achieve the same success here, but, still, a bold novel, distinct voice, and impressive debut.