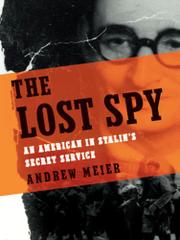 An American in Stalin’s Secret Service

Time magazine’s former Moscow correspondent profiles an American who traveled the world gathering intelligence for the Soviet Union, until he was swept up in Stalin’s purges.

Meier (Black Earth: a Journey Through Russia After the Fall, 2003, etc.) unravels an amazing story. The son of a prosperous Russian immigrant, Cy Oggins entered Columbia University in 1917. A brilliant scholar, he was swept up in student opposition to World War I and shared his left-wing peers’ fascination with Russia’s communist revolution. Thanks to J. Edgar Hoover’s obsession with subversion, undercover FBI surveillance, wiretaps and mail intercepts preserve a detailed account of American communism’s turbulent birth, in which Oggins and his wife Nerma played a modest role. Meier reminds us that Lenin’s USSR was equally obsessed with subversion, quickly organizing an elaborate, worldwide system of spies, moles, couriers and assassins. Recruited to this network in 1926, Oggins never spied against the United States. Soviet intelligence assigned him the cover role of a prosperous American scholar studying abroad; his residence served as a safe house for its spies. Oggins later traveled to China and Manchuria to work on various espionage schemes. But faithful service did not save him from Stalin’s paranoia about anyone who had contact with foreigners, which devastated the Soviet intelligence service in the late ’30s. Thousands of loyal agents were summoned to Moscow and executed or dispatched to the Gulag. Arrested in 1939 and sent to an arctic slave-labor camp, Oggins had a damaged leg that saved him from the most grueling jobs; he survived until 1947. Meier tells the painful story of his final years and Nerma’s desperate efforts to secure his release.

Gripping tale of a 1920s American radical who ultimately paid a terrible price for his idealism.