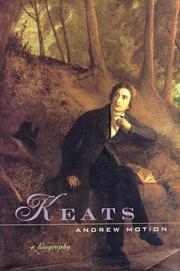 Whether illuminating Keats's famous lines or unearthing long-occluded facts about the most ill-starred of English Romantic poets, this superb biographical study displays an unusually sensitive erudition. Keats died of tuberculosis in 1821, at age 25, leaving behind only a few slim volumes' worth of poems. In his lifetime Keats was roundly mocked by critics—so much so that many of his contemporaries imagined him to have died of shame. These facts have given rise to an image of him as a sickly dreamer, ``half in love,'' as one of his celebrated odes puts it, ``with easeful death.'' It is this image of Keats that Motion (Philip Larkin: A Writer's Life, 1993) tries to put to rest. Motion highlights the tough side of Keats's character, introducing us to the child prone to brawling and fits of rage, and to the young man whose strenuous walking tour of Britain may have contributed to the breakdown of his health. This Keats was intensely engaged with society. He nursed first his mother, and then his brother Tom, as they died of consumption, and his mother's death inspired him to enter the medical profession and train as a surgeon. Motion argues convincingly that Keats saw his poetic vocation as consistent with this work, showing how his poems abound in expertly depicted bodies and often seem to have a therapeutic aim. Sometimes this desired effect would be on the body politic: Motion shows too how Keats's poems were informed by his radical politics—shaped in great part by his mentor, the radical journalist Leigh Hunt—and by his reactions to such crises in the reform movement as the Peterloo massacre. Himself a noted poet, Motion writes sprightly, striking prose: For instance, he describes Fanny Brawne, Keats's inamorata, as ``unformed, frisky, and quick-tongued: conventional in her tastes; vehement in her enjoyments.'' Far from burying Keats in a doorstop-biography tomb, Motion has embodied him in a book that is itself vehemently enjoyable. (b&w illustrations)