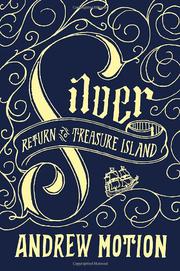 The British critic/biographer and former Poet Laureate, in his spirited sequel to Stevenson’s classic, Treasure Island, keeps the core of the original (the quest), while adding his own distinctive imprint.

It’s 1802, and 35 years since the Hispaniola set sail for Treasure Island. Former cabin boy Jim Hawkins owns a Thames-side inn outside London; his only child, also called Jim, is a well-educated amateur botanist. This 17-year-old Jim is our new hero and narrator, but don’t expect Stevenson’s pell-mell pace; Motion’s rhythm is much more leisurely. A blanketed figure in a small boat beckons to Jim. This is Natty, the tomboy daughter of the treacherous Long John Silver, who has his own inn upriver. It’s love at first sight for Jim, despite his unexplained fear of women. Natty takes Jim to meet Silver, blind and feeble. The old reprobate’s dying wish is for the youngsters to retrieve the remaining silver from the island. A ship and crew await them. Silver needs Jim to get the map, which his father keeps locked away; Jim’s theft of the map weighs heavily on his conscience, but he’s not about to pass up an adventure with Natty, disguised as a man for the voyage. Their position on board is privileged; Natty is her father’s representative, and Jim’s history is well-known. The situation on the island is horrifying. Stevenson’s three maroons, or castaways, have been joined by passengers from a shipwreck: 50 slaves and their guards. The maroons have imposed a reign of terror, resulting in a Conrad-ian “impenetrable darkness.” Natty will be captured. There will be exciting reversals of fortune before her stouthearted Captain’s party confronts the former pirates, who are almost too freaky in their “disgustingness.” Good people die; Jim must spill blood. In these scenes, Motion matches the raw vitality of Stevenson, though his conclusion is far more grim.

Motion’s plot wobbles as he casts his net wide to include slavery, but his ambition is admirable, as is his stylistic elegance.