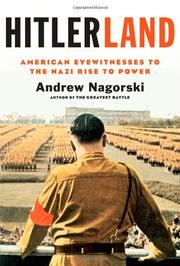 American Eyewitnesses to the Nazi Rise to Power

A contextually rich look at the buildup of Nazi power, revealing the feebleness of Americans’ assessment of the future danger.

In these seemingly casual impressions recorded in newspapers, letters, magazines, diaries and diplomatic reports, many Americans rooted in interwar Germany failed to see the menace in the increasingly inflammatory Nazi rhetoric, as Nagorski (The Greatest Battle: Stalin, Hitler, and the Desperate Struggle for Moscow that Changed the Course of World War II, 2007, etc.) depicts in this well-marshaled study. Or if they did—e.g., Chicago Daily News correspondent Edgar Mowrer or Foreign Affairs editor Hamilton Fish Armstrong, who interviewed Hitler on Apr. 27, 1933, and recorded, “So completely has the Republic been wiped out”—they were not believed. On one hand, most well-clad Western observers were approving of the German sense of method and order; on the other, the Americans were appalled by the enormous discrepancy in wealth between rich and poor and the Weimar Republic’s reputation for sexual licentiousness, especially homosexuality. Nagorski looks at the first wave of fawning observers, if not admirers, of the brash young agitator who engineered the Beer Hall Putsch of 1923, including U.S. Envoy Alanson B. Houghton, an industrialist who threw grand parties and blamed America for Germany’s economic woes, and Karl Henry von Wiegland, reporter for Hearst, who described Hitler as a “man of the people.” Some of the more shameless hangers-on included Ernst Hanfstaengl, a half-American, Harvard-educated aristocrat who became enamored of Hitler and served as his publicist; Charles Lindbergh, who shared aircraft secrets and a ringside box at the 1936 Berlin Olympics; and young Martha Dodd, good-time daughter of the American ambassador in Berlin. Few spoke out against Hitler’s virulently anti-Semitic message, and many sheepishly covered over their early lapses in later memoirs.

An engrossing study of the times made more fascinating and incredible in retrospect.