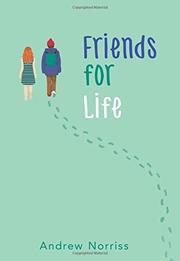 A phantom friend makes a life-changing difference in the lives of three English middle schoolers.

Bullied at their schools and depressed by their differences, Francis’, Andi’s, and Roland's lives change when they meet Jessica, a ghost still stuck in the everyday. Francis is seriously interested in fashion and design; he’s a gifted seamster. Body-building Andi has a black belt in karate; she’s short, squat, and looks like a boy. Video gamer Roland is huge and hugely fat. As an omniscient narrator, Norriss adroitly brings these kids together, gradually reveals what they have in common, and demonstrates the power of friendship. Readers will be sucked into the story by their admiration of Jessica, who can move through walls, appear wherever she wants (during the day), and change her clothing to match anything she sees and likes. By the time the idea of suicide is addressed directly, they’ll be thoroughly engaged. Even the addition of an adult character, a counselor who knows the right things to say and do to talk a fourth young teen down from a high wall, doesn’t interrupt the flow of this well-crafted friendship story. Bullying and clinical depression go together often enough to make this title useful for book discussions as well as private readings. First published in England as Jessica’s Ghost, this will be equally relevant to American readers.