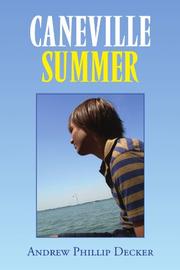 It’s summer vacation in the small town of Caneville, La., and 17-year-old Sam LaHay has a secret in Decker’s debut young adult debut.

The story opens at the beginning of summer—Sam’s last as a high school student. For the teenager, summer means a steady job at his mother’s nursery, junk-food binges with his best friend El (short for “Eleanor”) and the chance of a romantic encounter with Evan, one of his co-workers at the nursery. Evan doesn’t know that Sam is gay. No one does—or so he thinks. Sam’s plans for an ideal summer take a turn when El gets a job at a craft store at the mall, giving her a completely different schedule than Sam’s. El manages to convince Sam to spend some time with Mikey, one of their classmates whom Sam finds slightly odd. The two spend a good part of an afternoon together until Mikey tries to kiss him. After that, Sam discovers that El and Evan are dating. After Mikey runs away following a fight with his father, Sam finds him and the two realize they have a lot to learn from each other about being gay in a small town. Though the book is largely focused on Sam wrestling with the idea of coming out, Decker spends an equal amount of time illustrating a teenager’s lazy summer life in a small town: the neighbors, the malls, the boredom. Young adult readers will appreciate Decker’s frank discussion of sexuality, and those facing a similar experience will find Sam’s story relatable and edifying. The conclusion is packaged a little too neatly, but overall the book is a sweet coming-of-age story made even more appealing by Sam’s quirky narration.

A heartwarming summer chronicle, ideal for teens struggling with their sexuality.