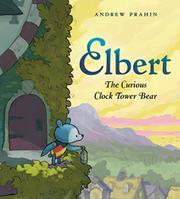 On a tower high above a town, Elbert is one of five bears that parade in and out of a clock on the stroke of every hour. His companions steadfastly carry out their marching duties; Elbert doesn’t, constantly distracted by myriad wonders. When his unquenchable curiosity disrupts routines badly, his fellows give him 24 hours to dispose of it or risk permanent banishment. On the ground, new experiences engender many new questions, but what to do with curiosity? Elbert tries various disappearing methods, but, frustratingly, nothing works…until, finally, something does—to his and the other bears’ benefit. This is an odd tale, with jarring elements. Curiosity isn’t portrayed altogether positively, and punitive aspects—threat of exile, Elbert’s self-reproach—may seem harsh or confusing. The story’s conclusion, however, reassures that curiosity is acceptable and rewarded with treats and a walkabout for all, suggesting Elbert’s clockwork partners will thereafter strut happily. The pencil and digitally colored illustrations serve the tale serviceably, with Elbert depicted as blue and inexpressive. (He is an automaton.) His smart, reflective questions appear in italics to differentiate them from the otherwise lackluster narrative. Frequent depictions of analog-clock faces throughout should pique the curiosity of readers/listeners who will ask what time the clocks show or proudly demonstrate their own prowess.

Readers probably won’t be curious enough to revisit this story after the first time.