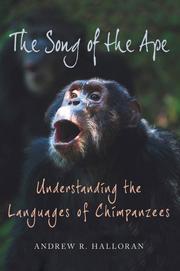 THE SONG OF THE APE

Understanding the Languages of Chimpanzees

A young primatologist at rainforest conservancy in Nicaragua digs into the mystery of chimpanzee language.

In 2004, while working as a zookeeper in a Florida animal preserve, Halloran watched in shock as his charges paddled to shore on a rowboat they had commandeered. The author’s responsibility was to scatter food and clean up after 35 chimpanzees—former pets, lab animals, circus performers and so on—who were divided into four groups and housed on islands surrounded by a canal. The setup was intended to protect tourists while providing conditions similar to those in the wild. Halloran chronicles how the 2004 incident affected him profoundly. The break-away group—composed of an alpha male whose authority had been challenged and four close followers—was apparently seeking new territory. How, the author wondered, had they planned and orchestrated the escape? Were they perhaps communicating on a deeper level than he had imagined? The experience laid the basis for his postgraduate work in biological and linguistic anthropology, and his thesis that the paradigm of teaching sign language to chimpanzees was flawed. Halloran attacks the arrogant presumption that because “another species fails to comprehend our understandings…we see that species as 'below' us.” The author writes that only by socializing with fellow primates do chimpanzees integrate their basic instincts with social learning. Using statistical analysis and detailed observations, he was able to compile a lexicon of the chimpanzees’ calls. By correlating the complex social interactions of the chimpanzee group and the back history of its members, he makes a compelling case that chimpanzees communicate in languages that they create.

Halloran is a wonderful storyteller, and his gripping account of living among the apes alternates between thrills and chills, humor and tender moments.