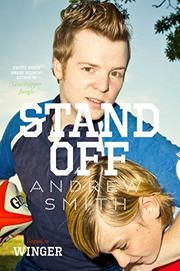 From the Winger series, volume 2

Fifteen-year-old Ryan Dean West, who skipped two grades in school, returns for his senior year at an Oregon boarding school in this follow-up to Winger (2013).

During his junior year, Ryan Dean started a relationship with kind, smart, beautiful Annie and endured the horrific loss of his rugby teammate and best friend, Joey, after he was murdered for being gay. Coming back to Pine Mountain Academy after the summer, he finds, much to his dismay, that he's been assigned to a tiny dorm room with a 12-year-old adorably earnest freshman, Sam, and the gradual, wonderfully weird (and grudging, on Ryan Dean's part) friendship that develops between the two is at once poignant and hilarious. He also grapples with shattering anxiety attacks, and though his love of drawing comics persists, a shadowy figure he calls Nate (an acronym for the Next Accidental Terrible Experience) continually rears his head in them now, which troubles Annie, who thinks he should talk to a psychologist. Intense rugby scenes transcend exposition, and Ryan Dean's brainy, self-deprecating wit shines, as when he muses after being jolted to the ground during practice about an imagined ice cream flavor called Failure-Pain Swirl. Bosma contributes Ryan Dean’s spot illustrations, comic strips, and charts, and occasional footnotes further add to the narrative fun

A brave, wickedly funny novel about grief and finding a way to live with it, with sweetly realistic first sexual experiences.