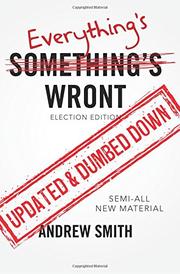 What might it be like to work closely with New Jersey governor and presidential candidate Chris Christie? As the narrator explains, “I’d like to think I’m his friend, but I know I’m not. Food is this guy’s friend.” What might the contents of Osama bin Laden’s diary be like? As bin Laden laments, “I can only get pornography by courier on flash drives…it is so old the last one starred Betty White.” What about “masterpieces of self-publishing” like Tollbooths by Earl Slavin, which consists of “An exhaustive survey of tollbooths from fabled trolls to modern RFID readers”? Exploring these and other such whimsical considerations, the reader is taken on a kooky journey through the silly (proposed “Jewish/American combined holidays” include “Oy, the Labor Day” and “Thankshavuot Day”) and the bawdy (such as the chapter entitled “How You Can Tell If Your Gynecologist Is Secretly Filming You”). Reminiscent of Jack Handey and other “Shouts & Murmurs” contributors, the book targets an audience comfortable with puns, flights of fancy, and fare less likely to see the pages of a publication like the New Yorker. Will the repeal of “don’t ask, don’t tell” portend the loss of the rank of “rear admiral” and the substitution of Brazilian waxing for waterboarding? How far might the Christie campaign get with slogans like “Frosting You Can Believe In” and “Two Chickens on Every Plate”? Rooted very much in the present, many jokes may not age well. Readers, however, annoyed by Citi Bikes, Hamid Karzai, and Donald Trump will have found an author to articulate such concerns, even if those concerns may not last. Brief, the pieces move quickly throughout, providing the opportunity to get through the entirety in an afternoon or less.

Ideal for those who find the concept of a news conference for a gay Central Park carriage horse hilarious, but the humor may not be universal.