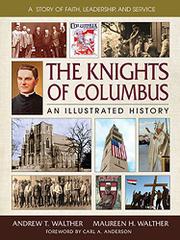 THE KNIGHTS OF COLUMBUS

A richly illustrated and entertaining history of the Knights of Columbus.

Andrew Walther, the Knights’ vice president for communications and strategic planning, and Maureen Walther, who worked for the CEO for 10 years, begin with an overview of anti-Catholic sentiments in the United States, which led to Father Michael Joseph McGivney’s founding of an organization of Catholic men in New Haven, Connecticut, in 1882. The group eventually became the Knights of Columbus, taking as its namesake Christopher Columbus and focusing on such concepts as charity, fraternity, and patriotism. The authors explain that the Knights expanded quickly and acted as a major force for Catholic pride and unity in the face of bigoted actions by the Ku Klux Klan and anti-Catholic voices in society at large. The Knights took an active role in serving the military during World War I and in fighting poverty during the Great Depression, cementing their place in American society. As the Walthers guide readers through the religiously active 1950s and ’60s, the challenges to religious life of the later 20th century, and the global perspective of recent years, they focus not only on the inner workings of the Knights and their mission, but also on their interaction with the wider church and society, including popes and presidents. The authors enrich the flow of text with countless photos, a number of inset sidebars, and a series of “Notable Knight” minibiographies, including such diverse individuals as Babe Ruth and Sargent Shriver. A running timeline at the bottom of most pages reminds readers of the broader historical backdrop of the Knights’ story. Though far from a critical account, this history does its primary job well: introducing lay readers to the Knights and providing devotees with an informative resource for casual browsing or more serious study.

An approachable, worthwhile history of a venerable Catholic brotherhood.

THE IRONY OF MODERN CATHOLIC HISTORY
by George Weigel
Nonfiction