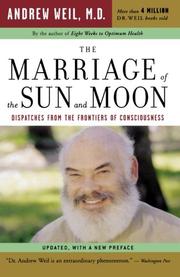 THE MARRIAGE OF THE SUN AND MOON

Dispatches From The Frontiers Of Consciousness

The 19 essays gathered in this collection were produced as newsletters while Weil was a Fellow of the Institute of Current World Affairs. The fellowship allowed the Harvard-trained physician to travel in the U.S., Central, and South America, following his heart's desire: the pursuit of altered states of consciousness as a means of realizing the full potential of the human nervous system. The "marriage of the sun and moon" is, just one of many metaphors Weil chooses (based on his experiences of eclipse-watching) to express the transcendent feelings experienced when there is union between complementary states of mind (conscious/ unconscious; higher/lower). He emerges as a very open person, just the sort to try for a "high"—and be successful. Indeed, he makes a point of saying that altered states of consciousness are inherent in the nervous system and can be triggered by many sorts of events—dancing, drugs, the sweatbox, eclipse-watching, even vomiting—which cultists can learn to control. He also stresses that a lot depends on set and setting. (One man's hallucinogen is another man's poison.) Most of the essays deal with drugs; here, Weil emphasizes what he considers to be significant differences between the use of the natural plant (good) vs. the synthesized or purified extract (bad). Thus, in an essay on cocaine he sharply contrasts the merits of chewing cocoa leaves vs. snorting the crystalline powder. He also issues strong warnings on Datura (Jimsonweed in the U.S.), has cautionary advice on marijuana, and makes salient remarks about cultural relativism in relation to all drugs. A surprising inclusion is an essay on Uri Geller in which Weil is seen first as convinced believer—until he spends a day with the Amazing Randi. Still, he likes to believe there is Something There. . . . So, unabashed advocacy of transcendent union, with some sophisticated observations on drugs and cultures.