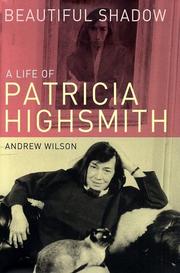 A Life of Patricia Highsmith

A closely drawn portrait of the writer who “celebrated irrationality, chaos and emotional anarchy, and regarded the criminal as the perfect example of the twentieth-century existentialist hero.”

British journalist Wilson uses Highsmith’s diaries, notebooks, letters, and interviews to catch (in her own words) her “moods, fits, and daily activities.” Perhaps best known for Strangers on a Train and her Ripley novels, Highsmith (1921–95) was never easy on her readers, says Wilson. Her work was often macabre and transgressive, noir and existential, drawing upon evil’s banality and life’s strange forces (“Each person carries around in himself a terrible other world of hell and the unknown,” she wrote in her notebook). Highsmith herself comes across as a distinctive character: she was reserved (“This is the tragedy of the conscience-stricken young homosexual, that he not only conceals his sex objectives, but conceals his humanity and natural warmth of heart as well,” she wrote, though she later became comfortable with her lesbianism); footloose; bereft of moral certainties (“I myself have a criminal bent. . . . I have a lurking liking for those who flout the law which I realise is despicable of me”); maybe even, as a friend noted, possessing “a form of high-functioning Asperger’s Syndrome.” Her relationships were many and urgent, and she had a quirky enough character to provide diverting stories, like the one of smuggling pet snails into France by hiding them under her breasts. But it’s the dark side that most fascinates Wilson, the warped perspectives of Highsmith’s central characters, their attractions and antagonisms, and her desire “to explore the diseases produced by sexual repression . . . like peculiar vermin in a stagnant well.”

Perhaps no one “can document a life in all its richness,” but Wilson has come close, getting at Highsmith from a number of angles and showing the splinters of identity in his subject that she herself found so captivating. (Two 8-page b&w photo inserts, not seen)