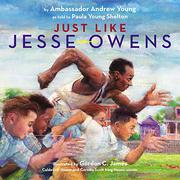 Before growing up to become a major figure in the civil rights movement, a boy finds a role model.

Buffing up a childhood tale told by her renowned father, Young Shelton describes how young Andrew saw scary men marching in his New Orleans neighborhood (“It sounded like they were yelling ‘Hi, Hitler!’ ”). In response to his questions, his father took him to see a newsreel of Jesse Owens (“a runner who looked like me”) triumphing in the 1936 Olympics. “Racism is a sickness,” his father tells him. “We’ve got to help folks like that.” How? “Well, you can start by just being the best person you can be,” his father replies. “It’s what you do that counts.” In James’ hazy chalk pastels, Andrew joins racially diverse playmates (including a White child with an Irish accent proudly displaying the nickel he got from his aunt as a bribe to stop playing with “those Colored boys”) in tag and other games, playing catch with his dad, sitting in the midst of a cheering crowd in the local theater’s segregated balcony, and finally visualizing himself pelting down a track alongside his new hero—“head up, back straight, eyes focused,” as a thematically repeated line has it, on the finish line. An afterword by Young Shelton explains that she retold this story, told to her many times growing up, drawing from conversations with Young and from her own research; family photos are also included. (This book was reviewed digitally.)

A pivotal moment in a child’s life, at once stirring and authentically personal.