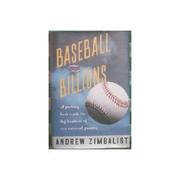 A Probing Look Inside the Big Business of our National Pastime

During the baseball strike of 1990, Zimbalist's disillusioned 11-year-old son suggested that his dad write a book on the economics of baseball. The happy result is this grand-slam study of America's only ``self-governing, unregulated monopoly,'' standing head-and-shoulders above Neil J. Sullivan's similar The Diamond Revolution (p. 661). Although baseball is booming (revenues doubled to $1.4 billion from 1985 to 1990), Zimbalist believes that danger looms, the result of a shrinking TV audience, ballooning salaries, and other woes brought on by ``commercialism, greed, and poor management.'' He points a well-aimed finger at team owners as the major culprits; while George Steinbrenner ``stands out in his zaniness and mismanagement,'' few owners escape Zimbalist's acid remarks. The sport's commissioners also take their lumps: Zimbalist doubts current boss Fay Vincent's claim that many teams are losing money, and he notes that franchise values are skyrocketing. The author explores hidden sources of revenue (like luxury boxes, some with marble-and-gold bathrooms) and the inflated salaries of superstars as clues to baseball's hidden economy, and he slams the treatment of minor leaguers, subject to pitiful pay and no job protection, as ``scandalous.'' Leapfrogging of teams from city to city also draws fire. As to how to heal our national pastime, Zimbalist offers no panaceas, although he returns time and again to the idea of expansion to 35 or 40 teams, a move that will relieve a number of problems, including an underused labor pool. A ``minimalist'' fix- up might also include guaranteed free access to special games like the World Series, revenue sharing among teams, and a baseball labor act. A ``maximalist'' cure would mean government regulation through the creation of a federal commission. A near-miracle—a nimble, exciting unknotting of a horribly tangled business—that's also a public service, as Zimbalist presents workable proposals that put the fan's interests first.