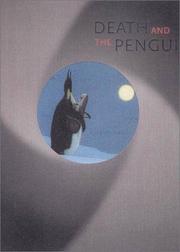 DEATH AND THE PENGUIN

A writer is sucked gently into the evil new Ukrainian economy as his penguin flatmate watches.

Soviet Kiev was no place for a thoughtful writer like Viktor Alekseyevich, but the post-Bolshevik city seems little better. Things are so bad that, for example, the Kiev zoo has had to de-access animals to stay within its budget. In an act of either mercy or work-avoidance, Viktor, dumped by his girlfriend, took on the care and feeding of Misha, a newly homeless penguin, who turned out to be not such a bad roomie. Quiet and thoughtful, Misha needs only a few frozen fish a day, and he’s affectionate in a non-fawning way. Perfectly content to stand behind the sofa or out on the balcony while Viktor types extremely short stories that have no market no matter how free that market may now be, Misha is unfazed by the occasional pop of gangster gunfire in the streets. Viktor and Misha’s quiet life peps up a bit when the editor of the Capital News calls to see whether he’s interested in writing what they call obelisks: pre-need obituaries for luminaries in the thriving Kievan underworld. Sure. Why not? The money is good, the work oddly interesting. And Viktor has the touch. He brings a novelist’s sensibility to this obscure, unsung (no byline for Viktor) art form. It’s a bit shaking when his obelisks are in ink and it dawns on Viktor that people are dying out there, thanks to whoever is assigning the work. But there are new complications requiring money and attention. A fleeing acquaintance leaves his young daughter (who adores Misha) with Viktor, and Viktor befriends the city’s expert on penguin care, an embittered academic on his way out of this world. Then Viktor takes on an attractive nanny for little Sonja. Is a nuclear family a possibility? Have to think about that. However well obelisk writing pays, those murders are, after all, murders.

Wistful but (thankfully) not whimsical. Funny, alarming, and, in a Slavic way, not unlike early Pinter.