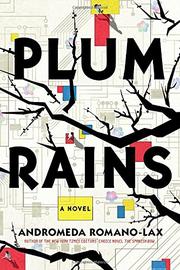 A Filipino care worker’s livelihood is threatened by an android in future Japan.

The year is 2029, and in Japan, technology rules every aspect of life. But Angelica Navarro still provides an essential service to her employer, Sayoko Itou, an elderly woman rapidly approaching her 100th birthday. She is a caregiver, closely monitoring Sayoko’s health, preparing her food, and helping her in even more basic ways. But when Sayoko’s son arranges for a new android prototype to be delivered to Sayoko’s home, Angelica begins to worry about her future. Sayoko, normally technology averse, is soon taken with the android and begins telling him long-suppressed stories about her childhood that even her son does not know. The android, who names himself Hiro, develops according to Sayoko’s needs and seems to outdo Angelica at every turn. Angelica has other problems to contend with: debt to pay back to her uncle who helped her immigrate to Japan, worrying news about her brother in Alaska, and an unexpected medical problem of her own. But the longer she fights against Hiro, the more she begins to wonder whether he might not be the enemy she initially suspected after all. This sci-fi tale by Romano-Lax (Behave, 2016) is hardly groundbreaking: In concocting the charming, wholly human Hiro, she draws heavily on other android literature and cinema, most notably Blade Runner. But, refreshingly, her spin on the genre focuses on an elderly woman and a male android, a dynamic that provides the novel with its most original and engaging material. Though the plot is somewhat lacking in incident, the thoughtful depictions of old age, memory, and trauma are refreshing. Angelica’s actions are sometimes frustrating or inexplicable, and the worldbuilding is wonderfully specific one moment and maddeningly vague the next. But on the whole, this is a compelling, enjoyable addition to the genre.

A well-written, entertaining novel that both enacts and subverts the tropes of android fiction.