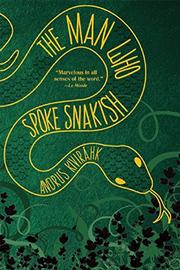 THE MAN WHO SPOKE SNAKISH

No shortage of blood spills across the pages of Kivirähk’s epic, fantastical novel, his first to appear in English.

In the forest of medieval Estonia, Leemet is one of the last humans to speak Snakish. That powerful language commands deer to lie down to be slain, wolves to allow themselves to be milked, and bears to lose their free will in order to do the bidding of others. Despite these powers, most forest dwellers have swapped their hunter-gatherer existence for agrarian life in the village, taking on Christian names, forgetting the old language, and yearning to speak German, the language of the iron men. Throughout, the mindset of “We’ve always done things this way” does battle with “It’s foreign so it must be good.” Each side proclaims the foolishness of the other using logic that is equally faulty, which is, of course, the point. Naturally, violence erupts from blind convictions, whether Christian or pagan, homespun or foreign. Invasions beget witch hunts beget massacres. The endless stream of blood lust and revenge drags on a bit too long, but wry humor offers relief from myriad spilled guts and beheadings. Leemet’s mother gets tearful when he can’t eat entire haunches of venison; forest women take bears as lovers, who moon after them with lovelorn sighs; and villagers lament not having the opportunity to sing in monasteries as castrati. Most astonishing is the inventive imagery, from lice crossbred large enough to be ridden by people to a legless flying savior who swoops across the cold sea to bludgeon knights and monks. Bears here exude more warmth and humanity than humans.

Though occasionally heavy-handed, Kivirähk’s well-plotted story of language, loss, and fanaticism speaks powerfully to our world’s ever present conflicts.