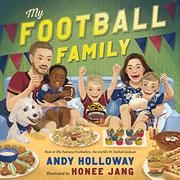 A pigskin-themed paean to family and family traditions.

As images depict a football-shaped newborn growing up, marrying, and helping to produce another—the second actually dressed in a football onesie, which is adorable—sports podcaster Holloway notes rookie season fumbles and triumphs, team huddles on the sofa to watch the big games, the passage of quarters and seasons, and major life events (like the wedding: “One day you may get drafted / To a franchise of your own”). All the while, Holloway promises to cheer from the sidelines in victory or defeat, to be there when needed, and to give each “wonderful expansion / of our football family” both a welcome and proper coaching. The family in Jang’s shiny, reasonably realistic illustrations includes three children. The verse’s language is nonspecific enough to apply to offspring of any gender as well as adoptees. In school settings and on playing fields of several sorts, the child, at various ages, light-skinned like their parents, joins a diverse group of peers, including one wearing a hijab and another who uses a hearing aid, while the child’s own family includes a dark-skinned sibling and, by the end, a child with, like their spouse, Asian features. (This book was reviewed digitally.)

A heartfelt forward pass from one generation to the next (and the next).