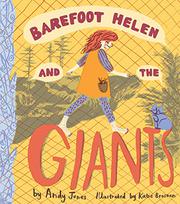 BAREFOOT HELEN AND THE GIANTS

A spunky girl takes on three fearsome giants in this rousing tale.

Fostered by black bears, a human orphan climbs trees, sleeps in caves, and catches salmon with her fingers. Discovered in the woods by a childless couple who adopt her and name her Helen, the girl learns to talk, eat with a knife and fork, and sleep indoors—but she always remains barefoot. One day Helen happens upon a castle where she spies a trio of infamous “cruel killer-giants” feasting and decides to attack them with her slingshot. She eliminates two of them, but, alas, the third giant—Bulleybummus—captures Helen, coercing her to help him kidnap Princess Antoinette for ransom. Helen, however, cleverly manages to behead him and returns to the woods, leaving Princess Antoinette determined to discover the giant-killer’s identity by opening an all-day, all-night storytelling hotel, hoping it will attract the mystery giant-slayer to tell her story. “Inspired by many versions of similar stories from Newfoundland and Labrador and from all over the world,” according to a concluding note, this earthy, quirky, humorous version blends traditional folktale elements with the contemporary spin of a strong female heroine who lives happily-ever-after with the princess in a “s’blendid family.” What begins as a single story evolves into stories within stories, pulled together in a surprising climax. Striking, original illustrations, worked in black and white as well as vibrant color, capture the fierce dramatic action in a trim more usually seen in picture books than middle-grade fiction. Redheaded Helen is as white as paper, the princess has beige skin and brown hair, and “their seven ten-toed children” are racially diverse.

A twisted tall tale told with verbal and visual bravado.