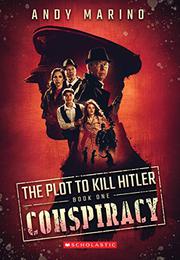 From the Plot to Kill Hitler series, volume 1

Near the end of World War II, two kids join their parents in a plot to kill Adolf Hitler.

Max, 12, lives with his parents and his older sister in a Berlin that’s under constant air bombardment. During one such raid, a mortally wounded man stumbles into the white German family’s home and gasps out his last wish: “The Führer must die.” With this nighttime visitation, Max and Gerta discover their parents have been part of a resistance cell, and the siblings want in. They meet a colorful band of upper-class types who seem almost too whimsical to be serious. Despite her charming levity, Prussian aristocrat and cell leader Frau Becker is grimly aware of the stakes. She enlists Max and Gerta as couriers who sneak forged identification papers to Jews in hiding. Max and Gerta are merely (and realistically) cogs in the adults’ plans, but there’s plenty of room for their own heroism. They escape capture, rescue each other when they’re caught out during an air raid, and willingly put themselves repeatedly at risk to catch a spy. The fictional plotters—based on a mix of several real anti-Hitler resistance cells—are portrayed with a genuine humor, giving them the space to feel alive even in such a slim volume.