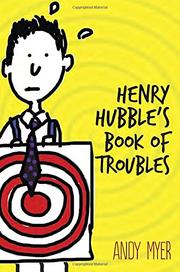 Middle schooler Henry Harrison Hubble keeps an occasional “pretty personal” journal, but when it’s stolen and pages are posted on social media, he has to take drastic action.

Judging by the contents of his backpack (one of his troubles), Henry is in the eighth grade in school, but he’s years behind in social skills and sense of humor. Fascinated by the fact that he was named after the ninth U.S. president, he’s particularly pleased with his family’s special connection: They own a (now dried-up and bottled) turd from Harrison’s dog. Henry makes a variety of unwise choices that lead to troubles on a whale-watching field trip, at Halloween, in the lunchroom and in science class. Forging his mother’s name on a discipline slip leads to a grounding and actually seeing the historic turd, but he’s eventually released for other troubles: a Valentine’s Day dance and the loss of his journal. Like many other titles aimed at the middle-grade reader, this purports to be the diary of a budding cartoonist. Henry’s first-person narrative is accompanied by black-and-white drawings. He also includes some (convincingly child-written) poems. The genuine issue in Henry’s story is lost in the bathroom humor, which fourth graders will probably love.