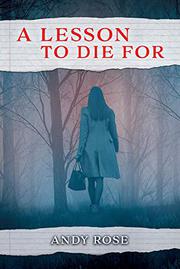 A LESSON TO DIE FOR

This 1990s-set sequel follows Manhattan teachers who become entangled with a menacing figure: the son of a Peruvian terrorist leader.

Lily Napolitano is a fourth-degree judo black belt and her sensei’s star pupil. But even with her prowess, she can’t fend off multiple assailants one late evening and flees to safety in the midst of gunfire. Because she can’t identify anyone for authorities to make an arrest, Lily settles back into teaching at P.S. 20, a Lower East Side school. The school receives new teachers Luke Natani and Mario DeMaio as well as a new principal, Dr. Seymour Lomsky, who quickly promotes Lily to a job as his assistant. Meanwhile, Paco Ñahui, who spearheaded the attack against Lily, is a criminal establishing a crew in New York. He seems determined to win the approval of his father, who leads a terrorist organization in Peru. As Lomsky’s increasing gambling debts ultimately connect him to the culprit, it’s only a matter of time before Paco finds the woman who escaped the assault. But when Lily proves a formidable and, if necessary, lethal opponent, Paco’s ensuing retribution involves people close to Lily, including her husband, Bobby, and fellow teachers. The early scene of Lily’s attack aptly establishes the protagonist as physically capable and Paco as a vicious baddie. But Rose’s (Lily’s Payback, 2012) urban thriller offers predominantly character development and melodrama. For example, Paco’s crew takes out a rival gang while he recalls—or dreams of—recurrent childhood beatings at his father’s hands. The captivating characters at P.S. 20 include Luke, a Navajo who has a romantic interest in teacher Mimi Purnell and a shocking family secret, and Mario, a former boxer. But when Paco isn’t actively looking for Lily, the pages are free of tension and suspense. It’s only much later, when Lily and her pals band together to try to thwart Paco, that the action picks up, though the inevitable finale is anticlimactic. Rose’s rather plain prose surprisingly tones down the short but periodic sex scenes and instances of violence.

While it delivers some hard-hitting action, this thriller is more successful as a melodrama.