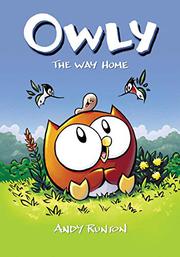 From the Owly series, volume 1

Owly, a gentle bird of prey, just wants to help. The other forest creatures fear him even when he approaches with kindness and support. Owly tries leaving seed to feed the smaller birds, but they flee when they spot him. He rescues two insects trapped in a jar, but again, they fly off when they spy the raptor. Owly’s luck turns when he aids a worm named Wormy trapped in a puddle. Wormy and Owly forge an unlikely but genial friendship, and their forest adventures include reuniting Wormy with his missing parents and then befriending—and ultimately having to say goodbye to—two lovely hummingbirds who must migrate south as the seasons change. When adversity challenges Owly, he reacts calmly, communicates his feelings with Wormy, and acts with warmth and bravery. Originally published in 2004 as a wordless, black-and-white volume, this reissue adds both color, with a cheery earth-toned palette, and dialogue among most of the characters, with the exception of Owly, who communicates only through pictures. Runton’s evocative characters are nothing short of huggably adorable and affirm the importance of compassion and empathy against perceived stereotypes. Owly and Wormy both identify as male characters; hummingbird friends Tiny and Angel identify as male and female, respectively.

A simple but by no means simplistic tale emphasizing the universality of kindness.