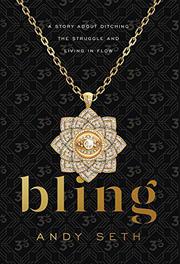 A Story About Ditching the Struggle and Living in Flow
by Andy Seth
BUY NOW FROM
AMAZON
BARNES & NOBLE
LOCAL BOOKSELLER
GET WEEKLY BOOK RECOMMENDATIONS:

A despondent rapper gets his groove back with the help of an Indian guru in this debut novel–cum–self-help guide.

A-Luv, an American rap superstar and son of Indian immigrants, enjoys a Malibu, California, mansion along with “an iced-out Rolex, massive diamonds in his ears, and countless rings and bracelets.” But his bling-obsessed ethos has saddled him with depression, loneliness, drug addiction, and a creative drought. His agent steers him to the Indian town of Laxman Jhula, by the holy River Ganges in the Himalayan foothills, and to Guddu, a jeweler and spiritual leader of a yoga retreat center. Guddu has an “inner glow that feels pure” and a thunderous laugh—“AH ah ah ah ah ah ah ah ah!”—that echoes through the book. A-Luv agrees to learn about his “high vibe lifestyle,” based on Hindu and Buddhist philosophy. Central to the creed is a mystic metaphysics, which maintains that “everyone is made of energy, which means we’re all the same inside, and connected,” and advocates the quieting of the egoistic, ever distracted “monkey mind” through the cultivation of the soul’s awareness by meditation. Guddu’s fetching assistant, Nikki, puts A-Luv through meditative exercises, like staring at a candle flame. Soon, his awareness and powers of concentration burgeon along with his attraction to Nikki. A dangerous whitewater rafting trip down the Ganges with Guddu teaches A-Luv more lessons on the “Five Fingers of Life,” a doctrine that emphasizes being present in the moment, accepting and dealing with the world even when it’s capsizing your raft, and treating life as a flow of playfulness and creativity. Seth, an entrepreneur and music producer, conveys the warmhearted book’s sometimes-esoteric Eastern wisdom in a down-to-earth way. The mechanics of meditation are illustrated in a straightforward fashion (“Focus on the rhythm and the sensations of your breathing. The warmth of the air, the sensations in your nose”). And the basic insights—focus, avoid neurotic rumination, take things as they come—are couched in pragmatic Western tones (“You can’t eliminate head trash without changing your beliefs”). The author’s prose is a bit didactic, but A-Luv’s common touch—“Almost every person I admire has meditation as a common denominator….I was like yo, maybe this is for real”—keeps things reasonably fresh.

An engaging tale about the meditative life whose hip-hop stylings make the enlightenment lighthearted.