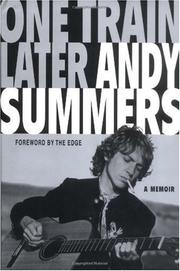 Engaging memoir by the guitarist for megaselling rock band The Police.

Summers’s account of his eventful career as a journeyman musician focuses squarely on his devotion to music and the process of mastering his instrument; those hoping for a lurid, behind-the-scenes tell-all will be disappointed. For the record, he paints Police front man Sting as self-involved and high-handed, drummer Stewart Copeland as motor-mouthed and overbearing—but he doesn’t dwell on these traits. Nor does he dwell on drugs consumed and groupies enjoyed, describing such diversions as mundane aspects of the itinerant musician’s life. More interesting is his life as a perennial cusp-of-fame British Invasion utility man in a career that included stints with the Animals; Zoot Money’s Big Roll Band; and Neil Sedaka. He rubbed shoulders with Clapton and Hendrix, toured relentlessly and practiced, practiced, practiced, finding himself at the end of it broke and giving guitar lessons to survive for an extended period in the 1970s. But then he met Sting and Copeland. The author analyzes incisively the unique sound of The Police, which benefited greatly from his past forays into jazz and classical guitar, bringing an unprecedented degree of musicianship to the era’s requisite “punk” sound. The most arresting passages here describe the group’s mammoth world tours: He sharply observes the cultural strangeness of Japan (where he runs afoul of the yakuza) and his experiences in Eastern Europe and the military dictatorships of Argentina and Chile—simultaneously terrifying and surreally amusing, as are his adventures as John Belushi’s drug buddy. Summers is refreshingly endearing, with a self-deprecating wit, brisk pacing and elegant turns of phrase.

A pleasant journey through some of pop music’s more interesting times.