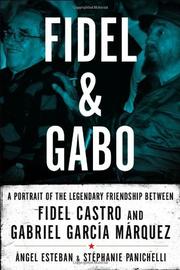 by Ángel Esteban and Stéphanie Panichelli & translated by Diane Stockwell

A frenetic look at the controversial friendship between a literary and a political giant.

On April 9, 1948, following the assassination of revolutionary political leader Jorge Gaitán, two law students joined the rioting on the streets of Bogotá, Colombia. Though they didn’t yet know each other, the momentous night made a significant impact on both men—Fidel Castro has now famously written about seeing amid the chaos a young man with a typewriter. That man was Nobel Prize–winning author Gabriel García Márquez. Nearly ten years later, Márquez, then a journalist, moved to Havana to cover the Castro revolution and was so inspired by the leader that he opened first the Bogotá and then the North American branch of Prensa Latina, Castro’s news agency. From this collaboration a friendship blossomed. For literature fans, Márquez’s political activism might come as a surprise. Prior to the publication of One Hundred Years of Solitude in 1967, the author and his family suffered from crippling poverty. Even after his international success, he believed that Castro’s politics were the answer to the many social and economic problems plaguing Latin America. Historians Esteban (Latin American Literature/Univ. of Granada) and Panichelli (Modern Languages/Wingate Univ.) chronicle the friendship through a list-like description of events that, while peppered with analysis, is hardly a riveting narrative. The authors’ research is careful and thorough, and details of the friendship humanize both legendary figures. However, Márquez also wrote about this profound friendship in his memoir, Living to Tell the Tale (2002), and his version is compelling and moving in a way that this second-person account could never be.

Skip this and go straight to the sources.