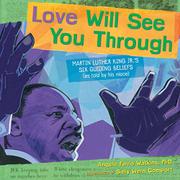 LOVE WILL SEE YOU THROUGH

Watkins defines the “six guiding beliefs” of the subtitle by describing six events from the civil rights movement in which Dr. King was steadfastly governed by his faith in “love and nonviolence.” The first precept, “Have Courage,” was demonstrated during the Montgomery Bus Boycott when his home was bombed. “Love Your Enemies” is the message of a Sunday morning sermon. “Fight the Problem, Not the Person Who Caused It” is exemplified by the letters written during his imprisonment in Birmingham. The 1965 voter-registration drive in Selma, Alabama, illustrates the belief that “When Innocent People Are Hurt, Others are Inspired to Help.” “Resist Violence of any Kind” refers to a 1966 incident in Chicago when Dr. King was hit in the head by a rock. And finally, “The Universe Honors Love” is seen in the tributes bestowed after his assassination. King is always referred to as “Uncle Martin” in this very personal homage. No references or sources are provided, and beyond a mention of President Lyndon Johnson’s signing of the Voting Rights Bill of 1965, there is no indication that anyone else was involved in the struggle. Comport’s double-page mixed-media collage and digital illustrations are strong and more effective than the text in conveying the measure of the man.

A heartfelt sermon, but useful only as a supplement.