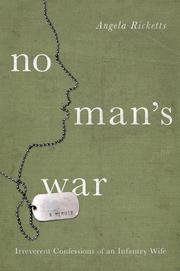 Irreverent Confessions of an Infantry Wife

An Army wife reflects on marriage, war and guilt.

On leave as commander during an 18-month deployment in Iraq, Ricketts’ husband made a startling confession: He was responsible for the torching of a building that resulted in the deaths of women and young children. Although cleared of wrongdoing, he was beset by anguish. As the commander’s wife, charged with keeping up morale among soldiers’ families, Ricketts felt complicit. “Writing this book,” she writes, “is my version of repentance, my version of forcing myself to look at a pile of corpses I helped create….I am both a perpetrator and victim of war, in my own tiny way.” Besides facing her complicity, she shares her sadness at the effect of Army life on her marriage, which deteriorated as her husband, an ambitious career officer, went on repeated deployments, ever longer and more dangerous. Each time he returned, he seemed to be a stranger to her and their children, each time more addicted “to being ‘in the fight’ and the adrenaline rush of battle.” Ricketts vents anger, as well, about much of Army life: its rigid protocol and hierarchy; the “fundraisers and luncheons and newsletters and team-building workshops” that she comes to find meaningless; the “KoolAid”—as she calls euphemisms and propaganda—that the Army perpetuates in its endless PowerPoint “snooze-fests.” Describing herself as “judgmental as hell,” “mischievous” and “borderline devious,” the author zealously scorns the “Perfumed Turd posturing” of pretentious, self-important wives of senior officers. War, she came to realize, is not waged by combat soldiers alone but by women whose marriages and families are disrupted, who raise children as virtual single parents, and who hide overwhelming fears and anxiety as they live with “another new normal” that comes with every new mission.

Outspoken in her critique of the “Army machine,” Ricketts celebrates the “secret sisterhood” of soldiers’ wives, defiantly and desperately battling for survival. A blunt, bold debut memoir.