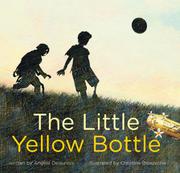 An earnest effort to shed light on the devastating effects of war on children.

Days after a village in an unnamed country is bombed, best friends Marwa and Ahmad are kicking a soccer ball when they come across a shiny yellow bottle. Ahmad picks it up, and the ensuing explosion injures both children. Marwa, the narrator of the story, heals completely from her injuries, but Ahmad has lost two limbs. When he's visited by a man who's similarly injured and living a full life with an artificial leg, Ahmad slowly regains hope. The illustrations are a blend of drawing and collage made to look like pages torn out of a child's school notebook. Inexplicably, the two illustrations that graphically depict Ahmad's injuries show the loss of limbs on different sides of his body. This well-intentioned but misplaced adult desire to expose injustices and laud the courage of children disfigured by landmines results in a weak story. There are no secrets about the direction the simplistic, didactic narrative will take, with a special message from Handicap International laid out opposite the title page. It's harder to tell who the intended audience is for this book; it's likely to appeal more to advocates of bibliotherapy than to children.

Likely to find its place on a few classroom shelves