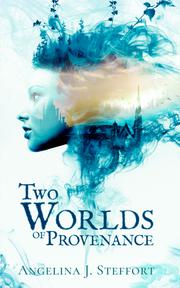 This YA novel sees a girl discover a parallel world and the truth about her lineage.

Maray Johnson has received an ornate dagger for her 16th birthday. Her father, Gerwin, tells her it once belonged to her grandmother Rhia. Maray’s mother, Laura, left five years ago to live in Texas. Father and daughter have recently moved from Washington, D.C., to Vienna because Gerwin is an ambassador for an IT company. Later, Maray strolls in a lovely, deserted park. Suddenly, fog develops and she sees two men sword fighting. When one of the men loses, Maray rushes to help him. This is 17-year-old Jemin Boyd, who’s badly wounded. Nevertheless, he’s able to defend her against a wolf-bear called a Yutu. He then says: “You look so much like the queen regent…I have no other option than to take you with me.” They travel through a tunnel of fog to the world of Allinan. There, Maray meets Jemin’s noble friend Hendrick “Heck” Brendal and learns that she’s a dead ringer for the queen, who hasn’t been seen in public for 18 years. Allinan becomes even stranger when Maray witnesses magic alongside the warlock Corey—magic that she initiates. Do further secrets connect her with this realm? Steffort (The Wings Trilogy, 2019, etc.) brings narrative sleekness to her latest YA fantasy, balancing romance, humor, and unique takes on familiar monsters. While in the futuristic-yet-medieval Allinan, Maray plays it cool, learning of demons that sow “seeds of distrust and destruction” and quipping: “That sounds a lot like the girls in high school.” The author pays homage to classic horror when the Yutu’s blood confers on one character (Ambassador Cardrick Langley) transformative abilities and when readers learn exactly why the queen has been hiding for 18 years. The true star of the novel is its elegant structure, which delivers twists with organic regularity. Sweetness and the promise of new love flourishing characterize the finale, leaving Steffort fertile ground on which to build a sequel.

A smoothly executed fantasy that feels buoyant even while exploring themes of abandonment and redemption.