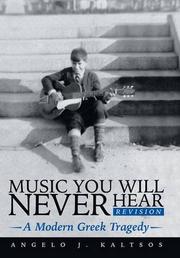 Music You Will Never Hear

Kaltsos (The Boy Who Was Shanghaied, 2014, etc.) explores a dark chapter of his family’s history in this memoir.

The author was raised by his Greek immigrant grandmother in the Roxbury neighborhood of Boston in a house full of aunts and uncles. One night at dinner in 1946, the family gathered around the table to discuss the recent murder of a police sergeant: “It made big headlines in all the papers. The city hadn’t lost too many police in the line of duty up to this time. It was major news, and there was a big manhunt for the killer or killers.” The only member of the family not present at the table was the author’s uncle Bill Goudas, who was laid up in bed with a hurt ankle. Goudas suffered from a lifelong heart condition that kept him from overextending himself. He did not graduate from high school, but he taught himself how to play guitar and had dreams of attending the New England Conservatory of Music. The family was therefore shocked when a swarm of police officers showed up at the house to arrest Goudas for the murder of Sgt. William Healy. All the men of the Goudas family were taken into custody (including the author, who was 16 at the time), though only Goudas was charged with participating in the nighttime burglary that led to Healy’s death. The book follows the absorbing story of Goudas’ trial and the surrounding media storm as well as his time in prison and eventual parole. He is an intriguing character, and the nature of his crime, imprisonment, and release is fertile material for literature. Kaltsos is not a particularly strong prose writer, but his proximity to the case and his willingness to tell the story through scenes give the work an emotional energy that keeps the reader invested enough to keep going. For the author, the tragedy of the title refers not so much to the death of the police officer but to the life that was slowly destroyed as Kaltsos looked on helplessly: that of his Uncle Bill.

A compelling account of an American life marked forever by a crime.