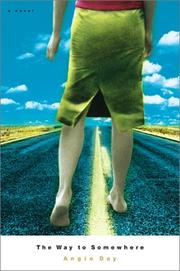 THE WAY TO SOMEWHERE

A likable, though conventional, first novel traces the growing pains of a tall girl from Texas.

Even as a child Taylor feels different, and it isn’t only her string-bean height (she eventually grows to six feet two) that sets her apart from the other kids in Houston. Quiet and observant, she comes to an early realization that her family is poor, her parents hate each other, and most people aren’t worth the time of day (though her young misanthropy may be related to her mother’s casual drunkenness and her father’s penchant for building model cars as a way of escaping his family.) Older brother J.J. surprises everyone by working his way through college, inspiring Taylor that there may be a life beyond waitressing and strip malls. She leaves home shortly after her father does (he’s gay and wants to spend the rest of his life driving big rigs), goes to college, and moves in with her mythology professor—or, as she learns to call him, Jeff. Jeff wants to play Henry Higgins, which is fine with Taylor, who gets a real home for the first time in her life. After Jeff dumps her (“Sweetheart, you couldn’t have expected us to go on forever”), Taylor drops out and begins to apprentice under Joe, a master carpenter. Finally happy, Taylor meets the man of her dreams—literally. J.J.’s old college roommate Luther has been fueling Taylor’s fantasies for years, and now, in the flesh, he’s as good as her teenage memories promised. The two fall in love, move to New York, begin to fall out of love. Newcomer Day creates a sufficiently inviting study of character here, but a certain aimlessness (note title) sedates the overall effect, making the conclusion—a happily-ever-after wrap-up—seem simply another event on the list of Taylor’s life.

Less a coming-of-ager than a wandering tale that somehow misses its mark.