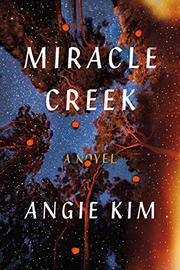 A Byzantine web of lies surrounds a fatal fire at an unusual treatment facility in this taut legal drama.

Kim, a former trial lawyer who turns 50 the same week her debut novel is published, does not make it easy on the reviewer charged with describing her book. This is a complicated and unusual story—though when you are reading it, it will all seem smooth as silk. The Yoos, an immigrant family from Korea, own a hyperbaric oxygen therapy tank in a town called Miracle Creek, Virginia. (In a characteristically wry aside, we learn that "Miracle Creek didn't look like a place where miracles took place, unless you counted the miracle of people living there for years without going insane from boredom.") HBOT treatment, which involves sitting in a chamber breathing pure, pressurized oxygen, is believed to be effective in remediating autism and male infertility, and those conditions are what define the group of people who are in the "submarine" when a fire, clearly set by an arsonist, causes it to explode. Two people are killed; others survive paralyzed or with amputations. The novel opens as the murder trial of the mother of a boy who died in the fire begins. As we come to understand the pressures she has been under as the single mother of a special needs child, it does not seem out of the question that she is responsible. But with all the other characters lying so desperately about what they were doing that evening, it can't be as simple as that. With so many complications and loose ends, one of the miracles of the novel is that the author ties it all together and arrives at a deeply satisfying—though not easy or sentimental—ending.

Intricate plotting and courtroom theatrics, combined with moving insight into parenting special needs children and the psychology of immigrants, make this book both a learning experience and a page-turner. Should be huge.