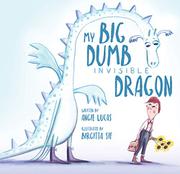 The weight of profound loss looks just like a dragon as it sits atop a grieving child.

“Have you ever seen an invisible dragon?” the unnamed narrator asks, describing how just such a creature came one day out of the blue and changed everything—making it hard to get out of bed, casting heavy shadows, ignoring tantrums and attempts to bargain. Gradually, though, the dragon takes leave for ever longer intervals, and, at last, after a day in the park with a friend and then an eighth birthday party, even when present it seems less oppressive. The nature of the loss is never directly mentioned, but the narrator remarks that “We had to get used to movie night without her famous peanut brittle popcorn,” as the child snuggles disconsolately with a sad-looking adult, and Sif leaves further hints in glimpses of an open photo album and an extra apron in the kitchen. The semitransparent, cartoonish dragon never looks threatening; by the end it has not vanished but shrunk down to a manageable size. Finally, pointing out that the initial question about seeing an invisible dragon was silly, the child closes with a wonderfully perceptive insight: “You can never see one by looking straight at it. You have to look at the person underneath.” The white-presenting child is never gendered.

Both sensitive and sensible: If some dragons can’t be vanquished, with time and help they can be borne.