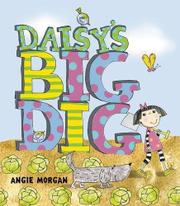 Community and cultivation mix and mulch in a sweet, but not cloying, British import.

Young Daisy may get a kick out of conversing with the neighbors on her street, but she seems to be the only one who does. Though everyone from old Mr. Hofmeister to the perpetually baking Mrs. Benjamin is friendly, folks keep to themselves. When Mr. Hofmeister confesses to Daisy that he’s hurt his back and can’t work his garden, the intrepid little girl devises a brilliant solution. Next thing anyone knows, she’s invited the whole neighborhood to a digging party with the added incentive of “hidden treasure.” The party’s a hit, with lonely widows pairing well with overtaxed mothers, a home-schooled genius bonding with a local professor, and even the university students hitting it off with normally grumpy Mr. Hofmeister. Now everyone’s happier and healthier, though it’s up to child readers to determine the secret treasure. Cheery watercolors and collage give the plot a special perk, and adults will dig (pun fully intended) as many tiny details as their children. Though allusions to the “hidden treasure” threaten to border on the insipid, the book deftly avoids the usual perils

Straddling the line between cute and down-to-earth, this is one gardening book that will strike its readers as blooming lovely.