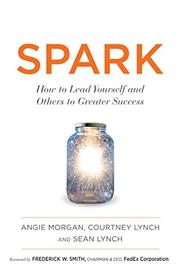 How to Lead Yourself and Others to Greater Success

Along with Sean Lynch, Morgan and Courtney Lynch (co-authors: Leading From the Front: No-Excuse Leadership Tactics for Women, 2006) run Lead Star, a corporate consulting firm that counts among their well-known clients Facebook, Accenture, Best Buy, and the United Way. The authors take issue with some widespread views about leadership and misinformation about the military and its culture. As Morgan writes, “most people think of leadership as a title, not as a set of behaviors, so they don’t see themselves as leaders.” While uniformed leaders are widely viewed as top-down rather than laterally distributed, the authors contend that the same qualities of high-level military leaders can be found at all levels of any institutional enterprise. Unfortunately, society values such leadership but does not teach it. Using what they have learned, the authors explore how to lead through the exercise of influence. They focus on the choices individuals make when they accept certain responsibilities, and they offer examples of how they came to grasp the significant principles involved in their own training and careers. Morgan relates how an officer she was terrified of went out of his way to help her deal with loss in her family, and Sean recounts how he found the courage to speak up for what he believed in. The capacity to influence grows from the values and principles many people hold dear, including self-control, a dedication to service, accountability, intentionality, and trustworthiness. Ultimately, though, true leaders must first learn to lead themselves before taking responsibility for others. Many of the qualities the authors espouse are those that many readers aspire to, no matter what their backgrounds.

A straightforward presentation that promotes values of conduct most of us would be proud to share.