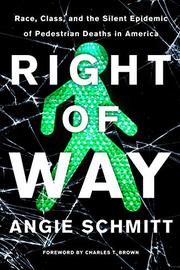 Race, Class, and the Silent Epidemic of Pedestrian Deaths in America

A surprising study of anti-pedestrian urban planning in America.

Most readers will be unaware that pedestrian deaths have skyrocketed since the 1970s; in 2018 alone, 6,283 pedestrians were killed trying to cross the street. Former Streetsblog editor Schmitt takes us for an uncomfortable ride into the hard realities of why pedestrians are more unsafe now than they've been in decades. In a book that will sit comfortably on the shelf next to Ralph Nader’s Unsafe at Any Speed, Schmitt provides an exhaustively researched study of the intersection of automobiles and pedestrians. The author uncovers a car-obsessed America whose civic planning is designed to discriminate against walkers while accommodating motorists. Unlike, for example, many European countries, the motorist has more rights than the pedestrian in the U.S. Even worse, as Schmitt explains, thinly veiled racism and classism are at the heart of many of the traffic laws that essentially treat pedestrians as second-class citizens. Pedestrians hurt or killed by cars are often blamed for being in the wrong place at the wrong time. Yet the problem, Schmitt shows convincingly, is often the flawed road systems themselves. And it’s not just the engineers who design these systems, but also the politicians who allow poor urban planning to go unchecked. The narrative is a deft balance of anecdotal and informational content, emphasizing the real-life human tragedies caused by anti-pedestrian bias but also backing it up with statistical research. Most importantly, Schmitt debunks common assumptions that pedestrian deaths are either blameless random accidents or, more often, the result of laziness or inattentiveness on the part of the walker. In reality, the culprit is a sometimes-lethal combination of badly designed streets, increasingly larger vehicles on the road, poorly estimated speed limits, and a lack of crosswalks, among other infrastructural failures.

Bravely exposes the human cost of public and political indifference toward pedestrian safety.