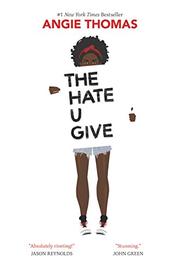 THE HATE U GIVE

Sixteen-year-old Starr Carter is a black girl and an expert at navigating the two worlds she exists in: one at Garden Heights, her black neighborhood, and the other at Williamson Prep, her suburban, mostly white high school.

Walking the line between the two becomes immensely harder when Starr is present at the fatal shooting of her childhood best friend, Khalil, by a white police officer. Khalil was unarmed. Khalil’s death becomes national news, where he’s called a thug and possible drug dealer and gangbanger. His death becomes justified in the eyes of many, including one of Starr’s best friends at school. The police’s lackadaisical attitude sparks anger and then protests in the community, turning it into a war zone. Questions remain about what happened in the moments leading to Khalil’s death, and the only witness is Starr, who must now decide what to say or do, if anything. Thomas cuts to the heart of the matter for Starr and for so many like her, laying bare the systemic racism that undergirds her world, and she does so honestly and inescapably, balancing heartbreak and humor. With smooth but powerful prose delivered in Starr’s natural, emphatic voice, finely nuanced characters, and intricate and realistic relationship dynamics, this novel will have readers rooting for Starr and opening their hearts to her friends and family.