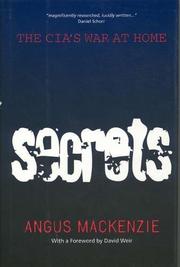 The CIA's War at Home

A muckraking adventure in the violation of First Amendment rights. Although it probably won't come as a surprise to most readers that the federal government is capable of spying on its citizens, Mackenzie professes a certain bewilderment at the lengths to which the CIA went to suppress dissent in the days of Vietnam. The veteran left-wing journalist, who died of brain cancer in 1994, began his career as the publisher of an antiwar rag called the People's Dreadnaught; harassed by campus police, he was forced to suspend publication, although he later won $2,500 in a lawsuit against Beloit College over the matter. At a national level, he writes, similar suppression was the order of the day. Although the CIA is constrained by law from conducting investigations ``inside the continental limits of the United States and its possessions,'' in fact, Mackenzie charges, it concocted an elaborate counterintelligence program against various home-grown protest groups in the 1960s and early '70s, reasoning that it was taking antiterrorist measures and thus living up to the spirit, if not the letter, of its charter. Among the targets, Mackenzie writes, was Ramparts, a venerable leftist magazine that managed to earn the wrath of the Feds by reporting on that very internal spying. Other targets were the libertarian guru Karl Hess, renegade CIA whistleblowers Victor Marchetti and Philip Agee, and a host of lesser-known dissidents. The CIA emerges as the heavy, naturally, but the real villains in Mackenzie's account are various policymakers from the Johnson administration to the present. ``Incrementally over the years they expanded a policy of censorship to the point that today it pervades every agency and every department of the federal government,'' he writes. And, he continues, that change was so gradual that few guardians of the First Amendment noticed. Mackenzie is occasionally over the top, sometimes glib. But his charges ring true, and civil-liberties advocates will find much of interest in his pages. (11 b&w illustrations, not seen)