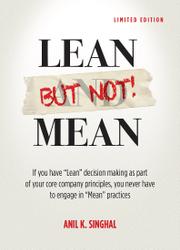 LEAN BUT NOT MEAN

Singhal runs a successful, publicly traded company, NetScout, and his debut proves that success doesn’t always imply ruthlessness. His business philosophy, “Lean But Not Mean,” is as much about everyday living as it is about management. Singhal’s fundamental point is that it’s quite possible for a leader to run an efficient and profitable enterprise without being unfeeling. In short, well-crafted chapters, Singhal uncovers the various aspects of LBNM in a clear, conceptual discussion augmented by simple, straightforward examples. Much of what he says flies in the face of conventional wisdom. For example, although many CEOs put shareholder value above employees’ needs, Singhal believes the organizations run by such leaders “have their priorities backwards”; he asserts that excited, motivated employees create loyal customers who, in turn, lead to more profitable companies. Indeed, he says, the best way to build a successful enterprise “is to get as many of your employees as possible involved as shareholders.” He also expresses his deeply held belief that trust is the bedrock of business. One of his more provocative LBNM practices, “The 5 Percent Rule,” was first used for corporate acquisitions, but he says that it’s appropriate for “most consequential decisions”; he explains that he involves himself in major decisions or actions only during the first and last five percent of the process, trusting his staff to execute the remaining 90 percent. Throughout this discerning book, the author employs a personal writing style that adds an element of informality but never diminishes the importance of his overall message. For example, in an epilogue, Singhal candidly observes that, while writing the book, he realized he was “unconsciously practicing” LBNM across all aspects of his company—and that he came to believe that LBNM transcended management to be “a way of seeing the world.”