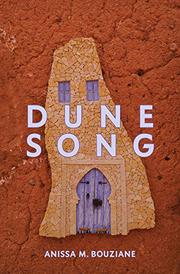 In the wake of 9/11, a Moroccan American woman seeks refuge in the land of her ancestors.

Born in the United States to a Moroccan father and a French mother and educated in America and Morocco, Jeehan Nathaar finds her life upended when she witnesses the 9/11 terrorist attacks in New York City. After involuntarily abandoning her Ph.D. dissertation in ancient history, she’s working as a corporate temp in an environment where her ethnic and religious identities make her an object of suspicion and even open hostility from co-workers who demand an answer to the question, “Why do you hate us so much?” Seeking an excuse to flee these pressures, Jeehan impulsively accepts an invitation from Ali, a young Moroccan journalist who’s her casual romantic partner, to join him in reporting a story on the plight of migrants fleeing through the Sahara and across the Mediterranean. But from the time she arrives in Casablanca to find that Ali instead has departed for Spain, her life takes a decidedly different turn. Finding her way to a remote desert lodging and suffering from both physical and emotional debilities, she takes up residence with Lahcen, Fatima, and their teenage son, Fareed, in the process discovering the futility of distance as a remedy for her angst. Bouziane’s debut novel subtly explores Jeehan’s malaise in both the fear-filled atmosphere of post–9/11 New York City and the harshly beautiful and unforgiving Moroccan desert, moving smoothly between those settings in terse, mostly alternating, chapters. In the latter locale, she’s especially adept at blending psychological realism with mystical elements that underscore the gulf separating the cultures of West and East. The story’s final third, in which Bouziane injects some thrillerlike elements as Jeehan comes face to face with the evils of human trafficking, feels underdeveloped compared to the rest of the novel, but that shortcoming ultimately doesn’t detract overmuch from the book’s dominant mood or themes.

A sophisticated examination of cross-cultural tension at the dawn of the 21st century.