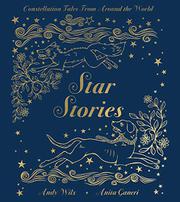 Constellation Tales from Around the World

A collection of international stories about the stars, retold by veteran children’s author Ganeri.

In this unusual compendium, Ganeri gathers traditional stories about the cosmos from across six continents. Unlike other star-lore collections that focus solely on ancient Greek folklore and nomenclature, Ganeri features tales from Inuit, Incan, Maori, Sumerian, and other societies, occasionally highlighting the names of constellations as they are known from that culture’s perspective. Each story is introduced by a brief contextualizing paragraph and is accompanied by illustrations from multidisciplinary artist Wilx, whose work employs bold outlines and rich colors. Laudable in its scope, the collection reminds young readers that the stars were not only observed from a Western vantage—for example, the three stars that ancient Greeks saw as Orion’s Belt are known to Tongans as “Alotulu, ‘three in a boat,’ ” and Orion himself was known as Osiris to ancient Egyptians. However, Ganeri’s narrative style fails to captivate over the 23 tales, and there are no appendices on further reading and reference materials. Many Indigenous oral traditions place high significance on the storyteller’s sources and ability to contextualize tales; these aspects are notably absent.

Like a meteor shower on an overcast night, this book’s dazzling premise is ultimately obscured by a few fatal flaws.