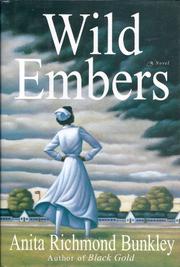 No wild embers in this tearjerker about breaking color barriers during WW II. Bunkley (Black Gold, 1994) writes with a stiff dignity that's better at detailing social history than sparking drama. Janelle Roy has everything going for her. Young, bright, and pretty, she's got a good job as the private-duty nurse for a wealthy white woman in Columbus, Ohio. She seems well on her way to the privileged future she has mapped out for herself, with little care for the problems of her race. But all her plans are smashed when her patient dies, and Janelle is accused of neglecting her duty. When she can't find another nursing job, Janelle enlists in the Army Nurse Corps, stationed in Tuskegee, Ala., which is admitting a small number of black personnel. Meanwhile, Janelle's younger brother Perry is helping the NAACP to integrate defense plants. Angry and alienated, he hates the idea of a segregated army. When he's drafted, he's sent to a camp in Louisiana, where the fact that he's eating C-rations while German POWs are fed hot meals enrages him so much that he looses his poise, commits a horrible act, and suffers a harsh end. Janelle, however, thrives in the army. She falls in love with a handsome officer, one of the first black pilots to fly combat missions. She even has her consciousness raised: When an injury sidelines her, she helps to integrate a defense plant. She gets some lectures in stiff-upper- lip resolve, as well. ``Nobody said it was going to be fair,'' a nurse tells her. ``You're not the first woman in love who has had to watch her sweetheart go off to war. You're Army! You're a part of this great big machine, so pull yourself together.'' The war against segregation on the home front, hobbled by bad prose and melodramatic chestnuts. (Author tour)