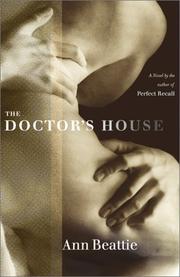 A family so dysfunctional that it makes the House of Atreus look like the Brady Bunch gradually reveals its secrets in Beattie’s emotionally charged seventh novel, her first since My Life, Starring Dara Falcon (1997).

The story’s told by three narrators, beginning with fortysomething Nina, a freelance copy editor, widowed since her beloved husband’s death from injuries sustained in a car crash, still locked in a tense symbiotic relationship with her brother Andrew, a divorced computer programmer and—like their father (the “doctor” of the title) before him—a compulsive philanderer. When Andrew informs Nina that he’s decided to look up an old (female) high school friend, her thoughts range back to various times during their unhappy childhood, and to Andrew’s several failures (which, back then, seemed to be successes) with women. The ill-judged middle section employs the viewpoint of their (unnamed) mother, whose lachrymose recounting of her victimization by her selfish husband, and her subsequent alcoholism grows quickly tedious and is alleviated only by Beattie’s potent disclosure of the woman’s indifference to her shell-shocked children (“Truth be told, they seemed like two other adults who lived in our house”). Finally, we get Andrew’s version, which succeeds much more fully in depicting an irreversibly damaged psyche, while also telling us a good deal more about the sources and the extent of Nina’s wary withdrawal from other people and obsessive fixation on her brother’s love life. Beattie skillfully avoids the cliché every reader will be expecting, and her portrayal of the coldhearted doctor, a genuine monster of appetite and ego, has a hallucinatory intensity. It’s smartly written, as always, and the dialogue can’t be faulted. And yet . . . one balks at the time spent in the company of these relentlessly unhappy people, suspecting that the situation treated here at novel-length virtually begs to be reshaped within the confines of a typical Beattie short story.

The novel really isn’t this writer’s métier, and The Doctor’s House is not one of her better books.