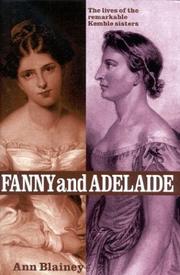 The Lives of the Remarkable Kemble Sisters

Actress Fanny Kemble and her sister, Adelaide (a well-known opera singer), were the daughters of Charles Kemble, who helped launch London’s Covent Garden Theater. The legendary actress Sarah Siddons was their aunt. Although Fanny’s life has been much written about, her sister’s adventures are less famous. With Adelaide’s newly public letters as a basis, Blainey (Immortal Boy, not reviewed) has framed this story as a tale of two sisters whose lives were the stuff of the rousing melodramas popular during their lifetimes. Fanny, forced onto the stage to support her father’s failing enterprises, gave up the love of her life. She became a star in London and in America, where she again found love (or, at least, mighty sexual chemistry) with a Southern slave owner, Pierce Butler. Married and forced to abandon her career as a result, she turned her excess energy to the cause of abolition and wrote and spoke on the subject in America and England. Her determined independence—and her husband’s extramarital affairs—led to a divorce in which she was forced to give up her beloved daughters. What to do after this but return to the theater? And, in fact, Fanny rebuilt a successful career as actress and author, best known for her journal of life on a pre–Civil War plantation. Although more discreet than her sister, Adelaide’s adventures were no less notable. She, too, surrendered the love of her life to forge a singing career in England and on the Continent. After her marriage to the son of an Italian banker she shone as a hostess, and her musicales and at-homes drew famous authors, artists, and musicians (including Robert Browning, Henry James, Frederic Leighton, and Felix Mendelssohn). Fanny was challenging and abrasive, Adelaide serene and thoughtful, but both suffered mightily (as only Victorians could) at the necessity to choose between dutiful matrimony and exciting careers.

Rich portraits of the sisters—and of the constraints and rewards of Victorian life. (b&w photos, not seen)