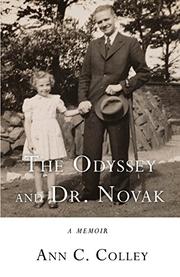 THE ODYSSEY AND DR. NOVAK

An author recalls two academic sojourns to Eastern Europe as a visiting professor of English literature.

Before she and her parents moved to the United States in 1953, Colley (Wild Animal Skins in Victorian Britain, 2014, etc.) spent her first 13 years in a small town outside Manchester, England, where her father was a Unitarian minister. It was there in 1946 that she briefly met Dr. Novak, head of the Unitarian movement in Czechoslovakia. From that one encounter and contact with postwar Eastern European refugees passing through her town, she developed a fascination with their part of the world. In 1995, accompanied by her partner, Irving Massey, Colley arrived in Poland to begin her year as a senior Fulbright fellow, teaching English literature at the University of Warsaw: “Strands of communism as well as remnants of Soviet rule” were “unraveling and clumsily intertwining with the government’s increasing commitment to a Westernized economy.” In early 2000, she and Massey traveled to Ukraine, where she spent another Fulbright fellowship year teaching at the Taras Shevchenko University in Kiev. Still dependent on Russia and emotionally scarred by the nuclear disaster at Chernobyl, Ukrainians were nonetheless optimistic about joining the West. This elegantly written memoir is an elaborate tapestry blending the countries’ troubled histories with the author’s in-depth observations of people, places, and customs. Colley’s keen eye for detail and her flair for the dramatic bring humor, texture, and context to pages filled with vivid imagery: “Waiting up in the trees,” gray-beaked ravens “fly down, floating, swooping, and dropping like abandoned cloth handkerchiefs conversing with the currents in the air.” Her prose displays a passion for the symphony of linguistic complexity, although sentences occasionally meander and twist along paths so long that the beginnings are forgotten by the time the ends arrive. The book, which features some photographs, is best enjoyed in intermittent doses. Still, the author depicts both her mental and physical wanderings viscerally enough for readers to feel like companions on the vibrant journey.

A highly informative memoir that explores Poland and Ukraine; the book should appeal to those who revel in the poetry of intricate prose.