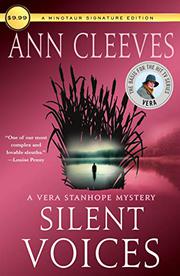 Struggling to get in shape at the Willows Health Club, DI Vera Stanhope, of the Northumbria Police, heads from the swimming pool to the steam room, where she discovers a dead woman curled up in a corner, a victim of strangulation. Social worker Jenny Lister had at least three excellent reasons to get murdered. First, she evidently had a secret lover. Second, she may have seen the person pilfering the staff lockers. Third, she was once involved with the Elias Jones case, in which a young tot’s mum drowned him in a bid to retain her man’s love. The case also caused Connie Masters, the caseworker Jenny supervised, to be pilloried by the press and fired. Coincidentally, Connie is now living in Jenny’s small village, where social arbiter Veronica Eliot seems determined to make her life hell. With her customary lack of grace, Vera is soon antagonizing witnesses and relying on her second-in-command, young Sgt. Joe Ashworth, to smooth matters over. Jenny’s daughter Hannah and Veronica’s son Simon, who agreed to defer their marriage at their mothers’ insistence, may be above suspicion, but everyone else is fair game—particularly Danny Shaw, a student working as the Willows’ janitor, until he too is strangled. Tedious interrogations reveal age-old parent–child brouhahas, one of which will eventually jeopardize Connie and her daughter and force Ashworth into the role of hero.

It’s easy to admire Vera’s brainpower but hard to overlook her mean-spirited management style. Still, her adventures, of which this is the fourth, have been a hit on British television, and readers devoted to Cleeves’ tales of Jimmy Perez (Blue Lightning, 2010, etc.) will want to give Vera a try.