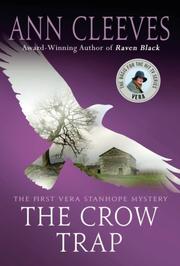 Three very different women—team leader Rachael Lambert, botanist Anne Preece, and zoologist Grace Fulwell—are hired to check the area of a planned quarry for environmental problems. Arriving at Baikie’s Cottage, which is to be the group’s home base, Rachael finds her friend Bella, who lives nearby, hanged in the shed along with a suicide note. Despite this gruesome discovery, the survey mostly goes as planned, although Grace, an uncommunicative young woman, observes an amazing number of otters in the stream running through the area. The owners of the land the quarry is on, Robert and Livvy Fulwell, are eager to see the project approved. The owners of nearby Slateburn Quarries, Godfrey and Barbara Waugh, are less enthusiastic, but the survey continues until Grace is found strangled near Baikie’s. Assigned to the case is Inspector Vera Stanhope, who often visited the cottage years ago with her father, a friend of the rather famous lady who owned it. As Vera seeks answers, she finds so many threads that link Bella’s suicide and Grace’s murder that it becomes hard to tell whether the murder is rooted in the quarry project or past secrets.

This first installment in Cleeves’ Vera Stanhope series, now published in the U.S. for the first time, offers abundant evidence why the police-detective heroine, physically unattractive but extremely clever, and her meticulously plotted adventures (The Moth Catcher, 2016, etc.) have made such a splash in bookstores and in the TV series Vera.